An e-commerce scam is going on in India. A cheat is luring people by offering seasonal fruits, dry fruits, clothings, etc. at a somewhat cheap price (calling it 'sale'). His site's name keep on changing. So beware of new sites that do not have 'Cash On Delivery' option. Also keep order quantity low for first few orders if 'Cash On Delivery' is provided. Remember 'mail order scams' of yesteryears; cheap products used to be sent COD, instead of products advertised.

Visit The Moscow Times: Independent News Outlet from Russia for news on Ukraine

Click here for reading our views on invasion of Ukraine by Putin's People. Our/my views are different from Indian Government's position.

This page has little mythology! The Om symbol is discussed here as a symbol (letter) and also as a word (syllable/sound).

A shlok (श्‍लोक) is a Sanskṛiŧ verse, typically of two line. A manŧra is a phrase (or rarely a word) used for meditation and chanting.

Jainism, Buđđhism and Sikhism originated from India after Hinđūism. These religions adopted some of the Hinđū philosophies and practices. These religions have their own forms and understandings of 'Om'.

Hinduism, Jainism, Buddhism, and Sikhism are together referred as Đhārmik (धार्मिक, Dharmic) religions. Some followers of Đhārmik religions believe that 'Om' is the ultimate, hyper or super-natural sound!

In ĐevaNāgarī, this word can be written as 'ओम्' or 'ओम'. It is general practice in Hinđī to drop the last 'halant' ('्'). So 'ओम' is generally preferred over 'ओम्'. The spelling 'ओम' is used in literature (mostly as noun); while the symbol 'ॐ' is used for religious purposes.

The Meaning of Om or AUm

We are not yet very sure of the precise meaning of the word 'Om'! It is certainly related to the God or Heaven! Twelve verses of Veđ collectively called Māṇdūk`ya Upaniṣhađ (माण्डूक्य उपनिषद) tries to explain this sacred word 'AUm'.

As per the Sanskṛiŧ grammar (Vyākaraṇ; व्याकरण) the vowel 'O' (ओ) is sometimes substituted for two consecutive vowels 'A' (अ) and 'U' (उ); Generaly public too prefer 'Om' instead of 'AUm' (अ-उ-म्)!

Some people say there is a relation between the words 'Om' and 'Amen'; others doubt it!

An 'Om symbol' is a sign (glyph, shape) to write (scribe, represent) the 'Om' sound.

People use this sign/symbol for meditation and worship.

Om symbol is drawn mostly as in the picture below i.e. as 'ॐ'.

If you want a bigger picture of the 'Om symbol', click the above picture.

Is Om a religious symbol?

Is Om the most powerful symbol?

There is no scientific study to prove that the 'ॐ' is better or more powerful than any other symbol or letter for meditation etc. No symbol can bring good luck, wealth or power. This symbol is sometimes misused by greedy preachers.

Can Om symbol help you in meditation?

IMHO, if a dark circle (or a point) can help you in meditation then the Om symbol can also help!

Proper Use of Om

Someone wrote that a reverse (flipped) Om brings bad luck. Luckily most Hinđū/s do not believe in such nonsense. If you care for sentiments of the Hinđū/s (who are mostly peace-loving), avoid drawing this symbol on footwear, near dirty places, etc. If you want to make tattoos of this symbol, please try to maintain the shape and avoid tattooing it on leg, thigh, etc.


The font 'Akhil HE' is used in the following paragraph to typeset the 'Gāyaŧrī Manŧra' in the smallest possible size.

No other font can render equally clear text of Gāyaŧrī Manŧra with all the marks at this size!

Give it as a Gift.

This font 'Akhil HE' is a great gift for some. So buy a single user license for yourself or someone important to you. This font is based on latest standards and technologies, so it will continue to work in future versions of Windows, Android and Linux.

It is economical, click the above button either to check the price or to buy. 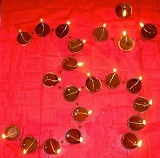 If you have a 'feed reader' added to your browser, click the following button to add our news feed. Otherwise, simply bookmark this page.

Why to tell others about this page?

If you know someone who is interested in Hinduism please recommend this page to him/her.

Most search engine do not return the address of this page for the term 'Gayatri Mantra', so s/he may not otherwise find it.

Search engines do not understand the transliteration scheme (developed by the author of this page) called Nīrajā-Latin used on this page .